The Forex market is the world’s largest market by volume, and it operates almost on a 24/7 basis because of the time difference between countries. This means there are trading opportunities lurking in the Forex market, which have attracted lots of professional traders. However, to the novice, the vast combinations of different currencies on the market may be dizzying. Which are the most robust trading targets among so many choices? We will find out in this article.

In terms of the current financial market, the United States indubitably has the most mature financial system by far. With its leading central bank system and economy, the US dollar remains the reserve currency of all countries in the world. Therefore, in the Forex market, the currency against the US dollar is generally more stable.

Table 1: Composition of the US dollar index

In addition, there are more investors in the more developed economies, such as Australia, New Zealand and other countries, so these countries are also favored by the market. In the practice of Forex trading, the main currency pairs we focus on are the following seven currency pairs (against the US dollar), which are also known as “direct” :

The above currency pairs are quoted against the US dollar. Currency pairs that are not associated with the U.S. dollar, such as AUD/JPY, are referred to as crosses.

We have listed seven major currency pairs in the previous section. As the US dollar is the most actively traded asset in the global forex market, the trading volume is the largest, and the spread of these currency pairs is relatively narrow and small. The lower transaction cost also means that it is easier for investors to make profits.

These major currency pairs have relatively low risk due to the fact that these countries are all large economies with a lot of published economic data, which makes their fundamentals more transparent. In addition, as mentioned above, the large trading volume of these currency pairs, coupled with the 24/7 operation time of the forex market, creates a huge amount of liquidity and distinguishes the forex market from the stock market where the main force can manipulate prices. As a result, most of these major currency pairs will not fluctuate dramatically and the trend is easy to continue.

These attributes of the forex market have attracted vast numbers of investors to participate in trading, with a large amount of trading activities every day, which in turn reinforces the advantages of spread and volatility. The relatively low risk of trading operations also makes it suitable for newcomers to the market. 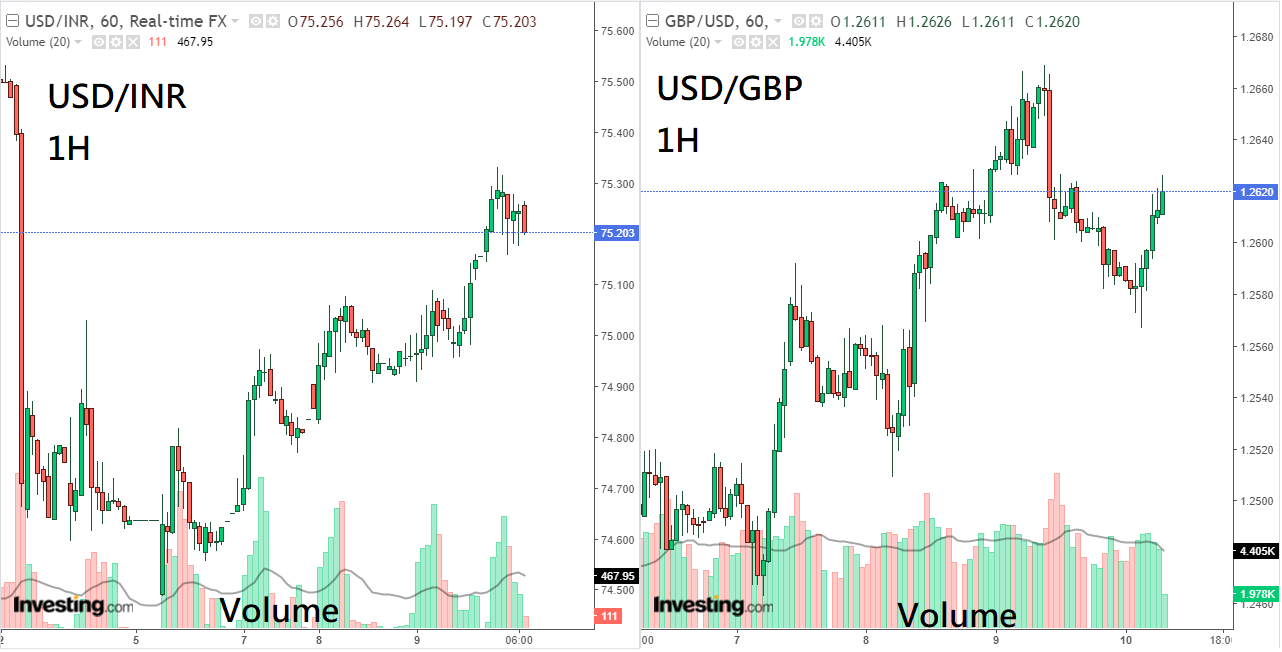 In terms of the USD / INR and GBP / USD pairs above, there is a significant gap between the trading volume of INR and a sharp drop at the beginning in the volume chart below. On the other hand, the turnover of sterling is more stable, and the trend is more noticeable.

Relative to the major currency pairs, the volume of crosses is usually smaller, and is thus more volatile due to the possibility of a sudden influx of bid or ask orders. Moreover, if some underlying fundamentals are clear, such as the yen’s recent sideways move and the euro’s recent bullish move, it is reasonable to assume that euro has a higher chance of rising against yen. If the analysis is accurate, it will be easier for investors to make profits by trading this currency pair.

We just mentioned that the price of crosses tends to rise and fall due to lack of liquidity. Although such volatility can make the market more profitable, but it is also a double-edged sword. For example, investors who are accustomed to trend trading could be thrown off course due to sudden sharp swings.

On the other hand, the difficulty of fundamental and technical analysis of crosses is slightly higher than that of major currency pairs. Taking the news of Brexit as an example, it has a decisive influence on the trend of the euro and the pound. However, some situations or events may have less influence on the euro and more influence on the pound. Such varying degrees of influence will directly increase the difficulty of fundamental analysis. In terms of technical analysis, investors would have to look at the technical trend of euro and pound against US dollar at the same time, as they may affect the trend of cross simultaneously. Even though both may be on an upward trend against the dollar, the temporal inconsistency may also lead to rise and fall of EUR/ GBP cross. This is also the most common problem of short-term strategy in trading crosses.

How to find the best currency pairs?

After introducing the major and minor pairs, I believe that you should have some understanding of these two different assets. What factors can help we quickly find a good underlying in actual trading?

Commodities with abundant liquidity and large volume, such as the seven major currency pairs against the US dollar, have steady fluctuations and are less prone to sudden surges and slumps. In addition, it is relatively easy for investors to learn relevant data and news in the first time, so as to grasp the market trend immediately. According to the following financial calendar, U.S. economic data is released almost every day, and at the moment of publication, there are usually some movements in the currency pairs against the dollar, which increases the opportunity to enter the market for trading. 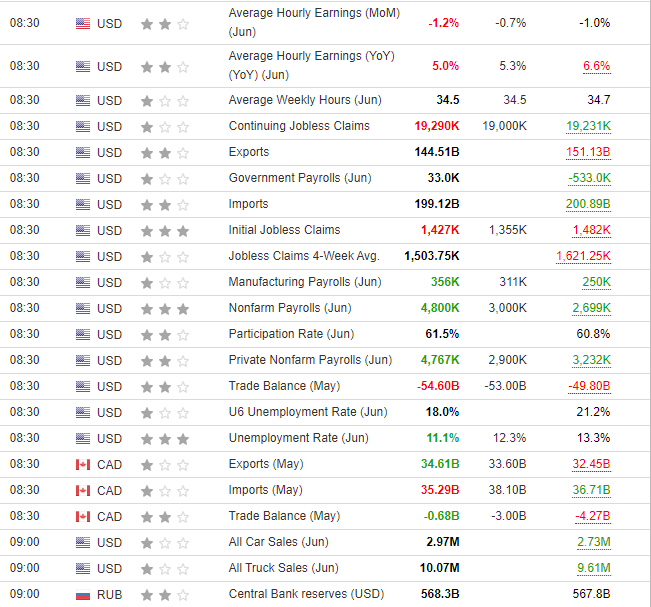 Therefore, it is suggested that for those who are just starting to trade and are not familiar with the rhythm of the market, they can choose these major currency pairs. Also, the trend is also more obvious and lasting for major currency pairs. As long as the operation is carried out in accordance with the general trend, the rate of return would be satisfactory.

2 / Choose the technical analysis that you are good at

There are so many currency pairs in the market and their movements are highly variable, so investors need to understand technical and graphic analysis in addition to studying fundamentals and news. After investors begin to master the skill of technical analysis, they can formulate their own set of strategies and find out their own ways of making profits. So, when you’re choosing which asset to trade, you just need to pay attention to whether the move of these currency pairs are consistent with your technical analysis, and it would be easier for you to find the right signals to buy and sell. 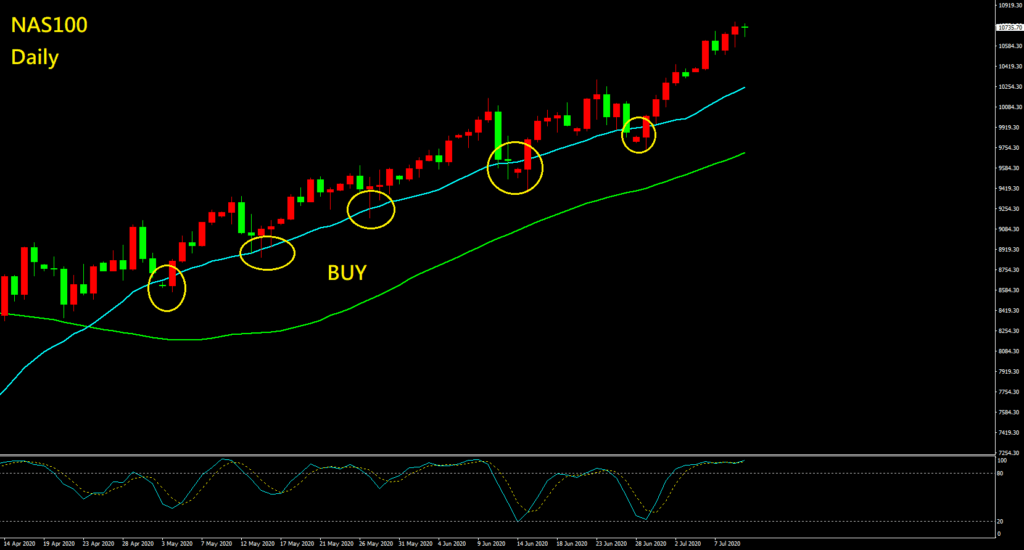 Take the trend trading of the moving average as an example. As long as the trend hits the support, you can go long. Although this is a simple way to trade, it is still a very effective and potentially profitable practice.

How to Set a Stop-Loss in Forex Trading?

A Guide on how to Profit in Forex Trading

MT4 vs MT5 – What are the differences?