In yesterday’s monetary policy announcement, the ECB still maintained its benchmark interest rate at 0%, lending facility at 0.25%, and deposit facility at -0.5%.

In fact, inflation in the eurozone reached a record high of 5.1% year-on-year (YoY) in January, and is expected to be even higher before finally declining.

“Inflation is likely to continue to rise and last longer than previously predicted, but will decline this year,” ECB President Christine Lagarde said at a press conference on Thursday.

According to him, the current increase in inflation is due to high energy and food prices.

“Compared to our expectations in December, the outlook for inflation risk remains upward, particularly in the short term. If price pressures are also driven by higher-than-expected wage increases or the economy returns to full capacity sooner, inflation will be even higher, said Lagarde.

Lagarde has always said interest rates are unlikely to be raised this year. But when asked again about the matter he said he would assess his condition carefully and “depending on the data”.

This strengthens speculation the ECB will follow other major world central banks in raising interest rates this year.

As a result, the euro exchange rate which previously weakened 0.33% turned up 1.2% against the US dollar.

“Today’s ECB has left room for market speculation if there will be monetary policy tightening this year,” said Stefano Pesole, currency strategist at ING, as reported by CNBC International on Thursday.

This is a surprise, meaning that the BoE will be aggressive in raising interest rates this year, and it is possible to do it again in the near future. 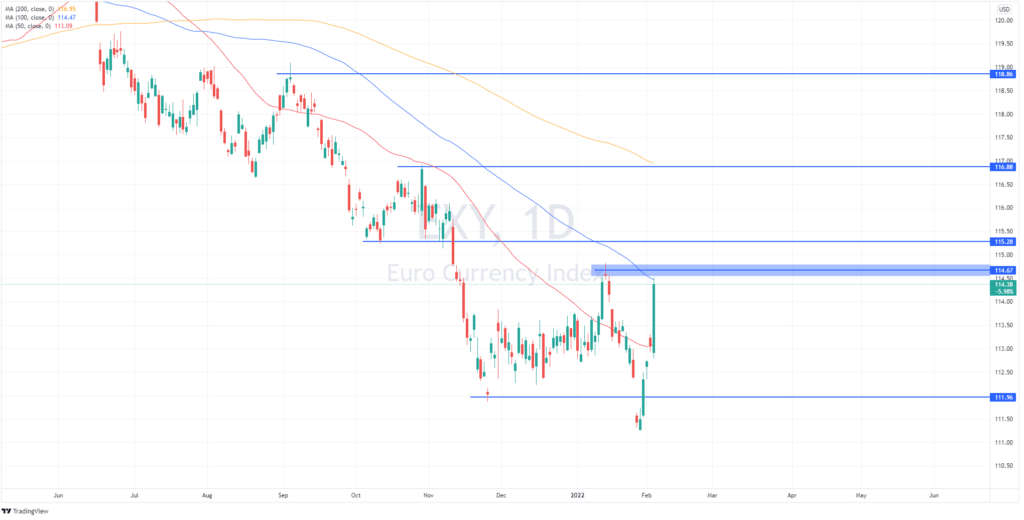 Euro bullish fake out on daily timeframe and back bullish to Moving Average 100. Next week, we might see a bullish continuation on the EUR pair. EURUSD for example.

If EURO manages to hold its support at 112.00 and reclaim its 115.00 level, then we can see a bullish continuation on EURO Currency Index. It means that trading pairs like EURJPY, EURGBP, EURUSD can go bullish further next week.