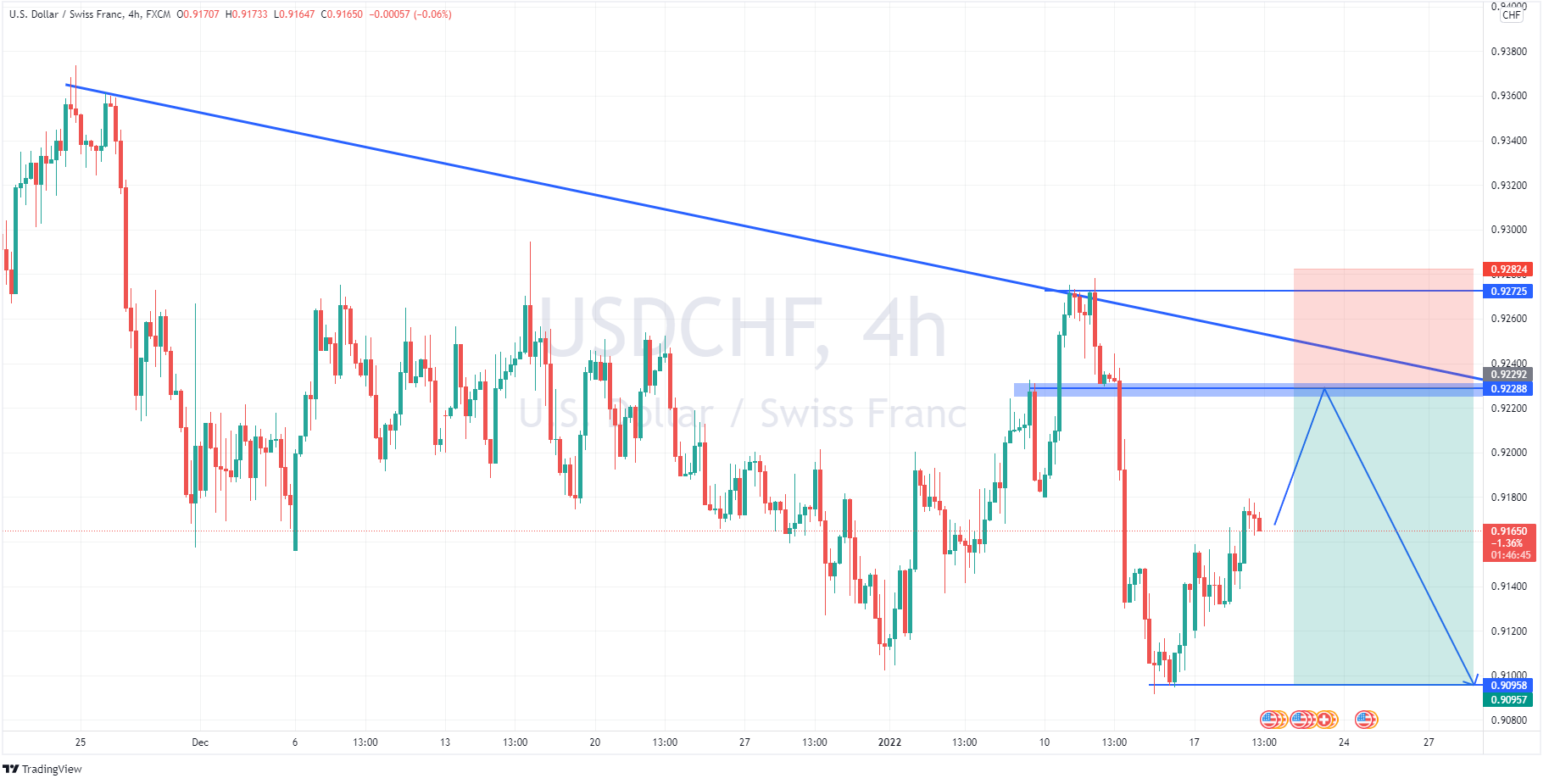 USDCHF: Bullish or Just a Correction?

Closed Bullish for the Last Three Days, Where Will USDCHF Go?

The dollar index rebounding from the key level also had an impact on the USDCHF which was bullish for the last three days. The pair shot up after touching the daily support at the 0.91000 area. In general, America is in a state of high inflation, rising 7% over the past year, being the worst since 1982. However, to overcome this, the Fed will soon further raise interest rates in 2022. This issue brought strengthening to the value of the USD.

Meanwhile, the Swiss inflation is no less worrying. Yesterday the monthly PPI data released showed the actual PPI at -0.1%, worse than the consensus forecast of 0.2%. On an annual basis also shows weakness for CHF with the actual at 5.1% compared to the consensus of 6.3%.

USDCHF looks bullish on the lower timeframe, but does this pair show the same sentiment on the higher timeframe?

Let's dive in a little deeper to see how USD/CHF fare on multiple timeframes:

From the monthly timeframe, we can confirm that the price is in a bearish trend by moving below all MA lines. Over the last few months, the price has tended to be choppy with a direction that is not clearly visible, indicated by the body of the candle that continues to shrink. The price is moving between the resistance at 0.93250 and the support at 0.90900.

We can draw a triangle pattern on a weekly timeframe. It can be seen that the price has continued to form higher lows since January 2021, but has also continued to form lower highs since April last year. Now, USDCHF is almost at the end of the triangle and will be ready to breakout in a few weeks. Last week's candle closed bearish, but still above support.

On a daily basis, we can identify a down-trendline by connecting a high with a lower high. The price has closed bullish for the last 3 days, but it seems that this movement is only a correction of the decline in the long-term timeframe where the price fell 170 pips on January 11 to 13 last. The price also seems to be having a hard time moving higher considering that there are MA 50 and 100 which will act as dynamic resistance.

On the H4 timeframe, the downward trendline is clearly visible. The price also seems to have formed a lower low and is now ready to retest at the key level at 0.92290.

The severe inflation that hit America coupled with the growing Omicron will put a heavy burden on the USD valuation. So in general, the USD value will continue to weaken unless there is tapering and the realization of an increase in interest rates from the Fed, as the central bank in the United States.

Meanwhile, Switzerland, which is one of the countries with the highest level of GDP per capita in the world, is also slowly improving its economy. Switzerland's strong economic performance has been driven largely by the services sector. It was quite hit during the pandemic. But with the vaccine and good health protocols in place, the Swiss economy will soon recover. Finally, let's see if USDCHF can retest to the key level and drop towards the daily support.