ZFX: Risk aversion seems to be a trend rather than gold prices hovering high

Trend Review : Gold prices hovered on Monday (February 10) and even if the US Dollar continued to strengthen, investor confidence remained fragile, the global pneumonia outbreak remained unclear and funds remained in the gold market. Gold prices, which opened slightly higher at around $1,571.8 on Monday, had surged to $1,576 in early trading, but were under immediate pressure, with the Asian market falling mainly at the $1,570 mark. The Euro session rose again, but failed to break through. The pattern has remained until the U.S. opened, with a high of $1,576.9, but ended the day gold eventually falling back to $1,572 and still up 0.11%.

Fundamentals / Market News : Gold prices did not rise much , but keep an eye on the US dollar ‘ , which is still hovering at US$1570 , which means higher against other non-US currencies . Even as the stock market stabilised on Monday, investors remained cautious, taking in safe-haven assets at the same time, and funds did not flow out of gold and bond markets.

ZFX analyst Jacob Leung said Monday’s gains were seen as U.S. bond rates continued to fall and gold prices were supported. This shows that the market has not given up on gold or adopted a “hedge strategy” in pursuing these risky assets in the stock market.

The number of new confirmed cases of pneumonia in mainland China fell below 3,000 on Monday, more or less easing market panic. Investors are also waiting to see if the stock market can hold up, as there are signs that some funds are betting optimistically amid the uncertainty. There are three reasons: the strong performance of U.S. economic data, the second is that some investors believe that the impact of the outbreak will only be short-lived, not sustainable, and third, investors are expecting global central banks and governments to launch revitalization measures in response to the outbreak.

On the trend, last night the low price of gold has pushed higher and higher, but ultimately the end of the market, this morning it seems that the downward pressure on gold prices began to appear, beware of buying power has been exhausted.

ZFX analyst Jacob Leung said it was important to note that last week’s strong US data performance did not appear to be reflected in the gold market. Of course, the city is a major refuge from the global pneumonia epidemic, but it is hard to ensure this continuity.

In any case, as long as the pneumonia outbreak is not under control, uncertainty in financial markets will not be eliminated, investors will not be reassured. Monday’s market conditions seemed to be upbeat, but Tuesday’s tone was still hard to judge, and the mood was changing too quickly and was the biggest driver of the market. 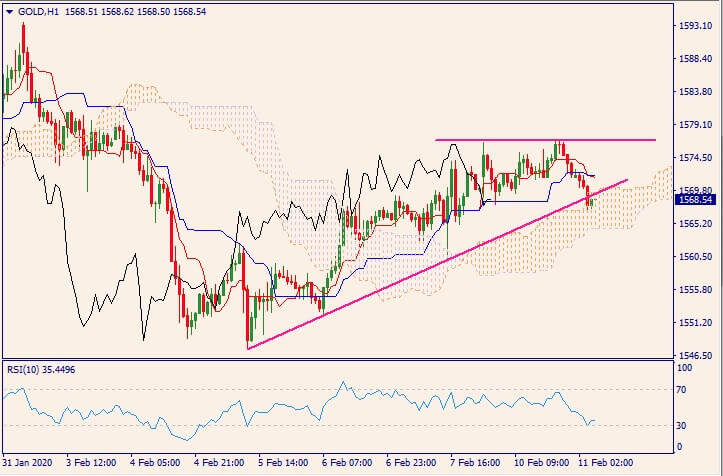 Short-term technical trend : the hour chart shows that the gold price fell back to the cloud chart, the trend became uncertain, earlier in the rising channel operation also has signs of loss, the same negative. Above the resistance was established at the gold ratio of 61.8, the steady upward pattern ended. If there is no breakthrough above, and go under the $1,565, do not rule out a larger adjustment.

On the trend, the u.S. dollar and gold market are still strong, do not expect the situation to continue, close to watch.

Risk Tip: The above contents are for informational purposes only and do not represent ZFX’s position, and ZFX does not assume any form of loss arising from any trading and purchase operations conducted herein. Please firmly their own thinking, do a good job of risk control.